In July and August  of 2014, I served as a video designer and marketing consultant to Jafra Cosmetics, working with Video & Event Production Manager, Alberto Gomes, to build branding and video content for the 2014 Jafra National Conference, held in Las Vegas, and other complementary video pieces for marketing and sales training. Working both remotely, and at Jafra Cosmetics International’s headquarters in Westlake Village, I designed and animated bumpers and motion graphics pieces, and edited video and photographic elements, to build more polished and cohesive image for the brand, and a more engaging experience for visitors.

I can admit, I was not familiar with the brand before the project, but I soon learned Jafra has a long and rich history. The company dates back to 1956, when it founded independently in Malibu California, by Jan and Frank Day (hence Jafra). It is now held by Vorwerk, an international conglomerate based out of Germany, which has helped it grow across the United States, as well as Europe and Latin America. Even in the United States, it enjoy a very diverse user base, heavy in Spanish native speakers of Latin American descent. My ability to understand the Hispanic market, and to work across English and Spanish, as a first generation Mexican-American, helped here, as I developed bilingual branding and content.

I worked with pre-shot green screen footage for two key testimonial segments. It wasn’t optimally lit, as is regularly the case with footage captured during quick, improvised shoots, but with some tweaking, was very workable. Here is what the original footage looked like: 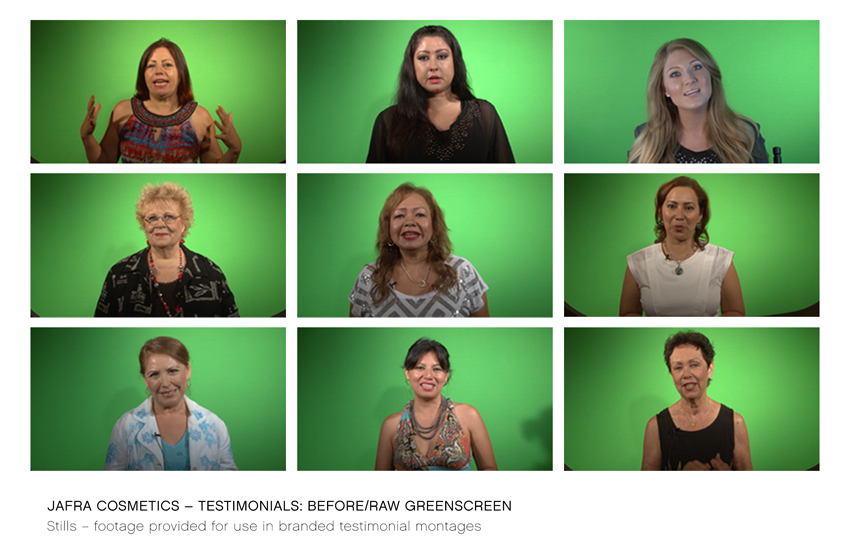 A branding concept of, “Jafra is..,” was carried over throughout all materials for the event, but the core theme for the gathering was “Jafra is Hot.” This was fitting for an event event held in Las Vegas in the summer, and for a brand going through changes and aggressive expansion. We wanted to highlight the “hot” theme through sound and imagery and sound. I worked with Jafra’s Video & Event Production Manager, Alberto Gomes, who gathered some footage originally from recent promotions for one of Jafra’s fragrances, “Latin Fire,” and song lyrics (in English and Spanish, since the final audience was to include native speakers of both). I animated the text to sync with the lyrics, and at the end, we cut to one of the animated title cards I created for the event:

Note “hot” was not translated to “caliente” in any written text, to keep the branding mainly grounded in English, and to avoid the heavier connotations for the term in Spanish, which you can probably guess.

Jafra is built around a beauty consultant approach, similar to Mary Kay and Avon. I the following motion graphics piece to show a sampling of some of the many various places Jafra representatives can be found across the United States, that highlights some top regional managers:

The end tag builds upon the “Jafra is..” concept, and turns it on the attendees, with “You are Jafra.” This, combined with the nation anthem, and the images of the American flag and the contiguous United States, is meant to foster unity, by reminding the diverse representatives of their common ties.