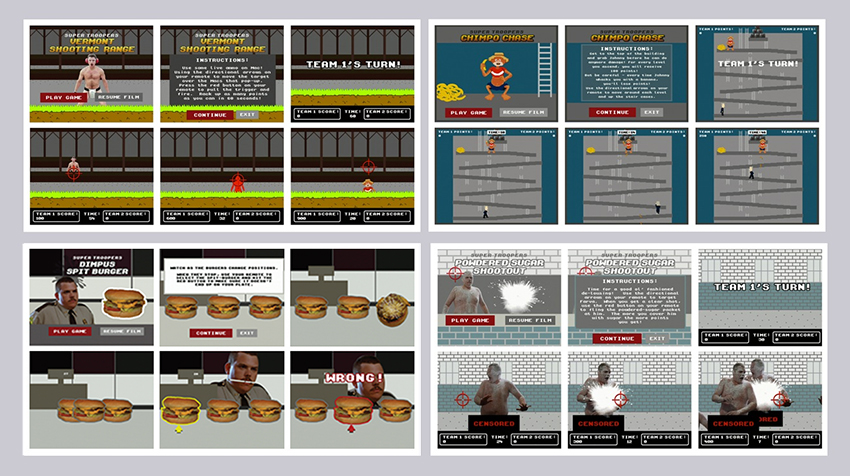 For the 2008 Bluray release of Broken Lizard’s Super Troopers, Fox gave the team at Trailer Park unprecedented free reign to explore fun and ridiculous extras. The disc ended up jam-packed with several original shorts and interactive features, including a drinking game. Four set-top mini-games that I designed, and are shown above, play a part in this. All are purposely low-fi and inspired by video game experiences of the early 80s, with images from the film mixed in. This was appropriate for the ironic tone of the film, and for the natural limitations of Bluray set-top boxes – we weren’t talking about PS3 level gaming here! These games come up at select points in the film when the drinking game is activated, and are all designed to coincide with specific scenes. Super Troopers fans may recognize the references to Johnny Chimpo and his butler (in a homage to Donkey Kong), Mac’s target practice scene (in a bit of an homage to early shooters, like Duck Hunt), Farva’s de-lousing scene (in another homage to retro shooters), and Farva’s unpleasant encounter at Dimpus Burger (in the form of a classic mix-up game). I may or may not have used a burger from the In-N-Out down the block for the latter.