Waitress, another indie sleeper hit of the ‘07 season (see Once). I was called upon for motion design and animation here, and the final product is a combination of original footage and shots from the film. I started the menu with an exterior shot of “Joe’s Pie Diner,” the restaurant featured in the film. Cutting to the inside, we then we see the film’s protagonist, played by Keri Russel, walk past the screen. This gave me the opportunity to transition to the footage we shot in the office, using our office manager, Katherine, as our hand model. The film’s title comes into frame in the form of a flickering neon sign, followed by the menu options. The dvd menu options, not the restaurant’s, of course. I did get a free piece of pie out of this shoot though, which was not bad. 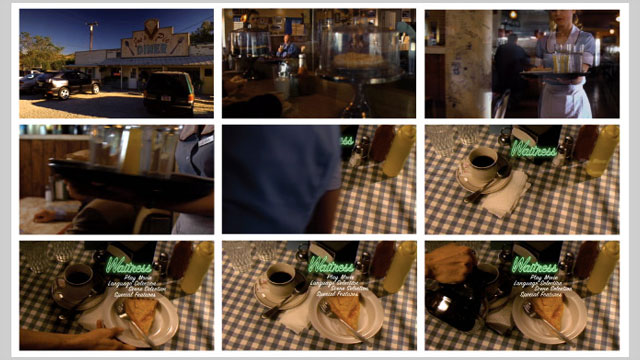 Once – DVD Menu Design and Animation
Scroll to top